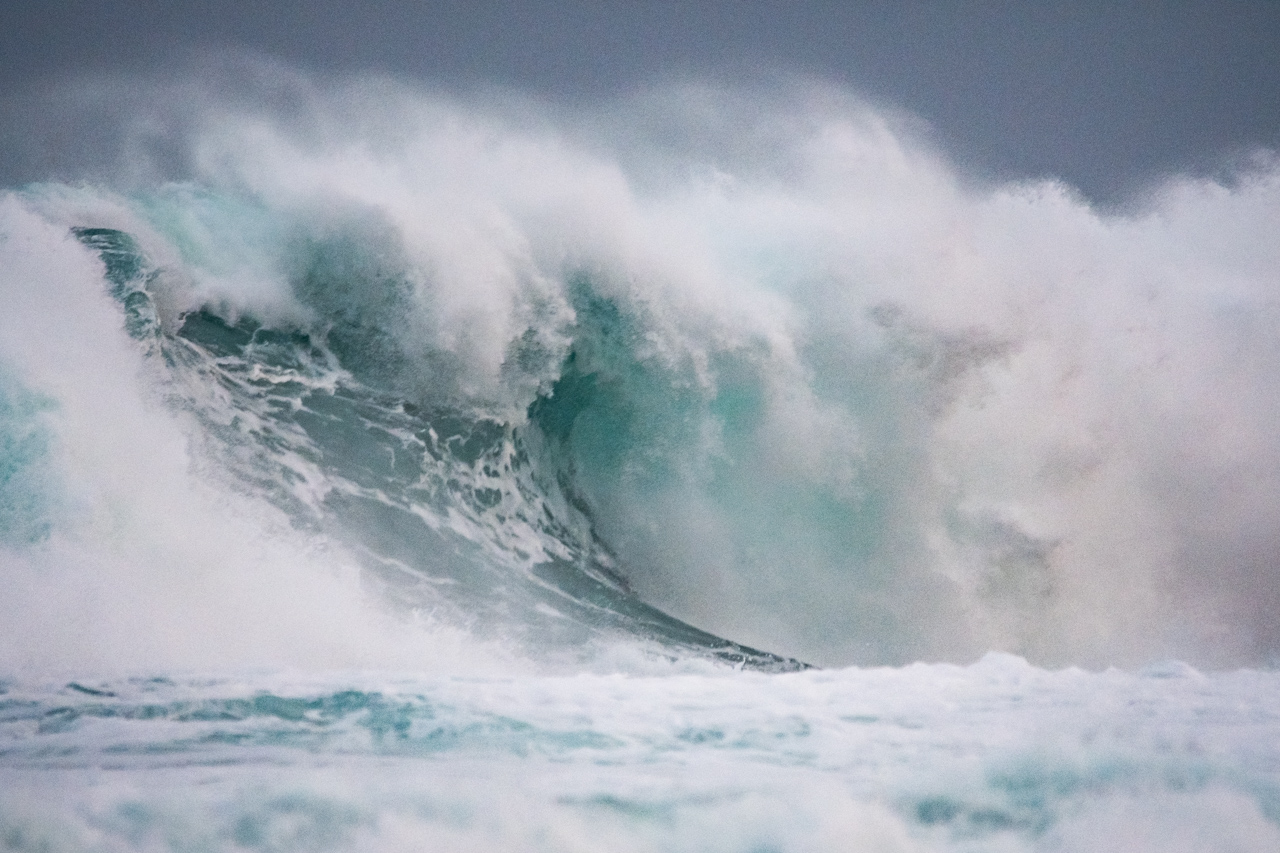 I ran an Orkney landscape Photography workshop in March 2020. It was so successful that it sold out and I have another photography trip to Orkney in 2021.  As with all my workshops, I always ensure I get to know each location well before taking groups. So I spend as many weeks as possible in the location in the years beforehand. And Orkney is no different. I spend every new year on Orkney and below I wanted to share New year 2020 on Orkney with you.

Our arrival on Orkney timed with high winds and driving rain. But also some very large waves, so I was completely happy. I went out first thing as the forecast was for 90% rain in the afternoon. So I headed up to Birsay to see how the waves were looking. They were looking pretty good and I spent a wonderful morning out getting to know the wave patterns and the area. I always find it takes a while to understand a particular location and to really feel the place and the sea before successfully shooting. I loved just having the luxury of experimenting with the water and creating soft images with longer exposures that said something about the landscape and the feeling of being there. Watching the waves meet in the middle and crash together, dance about in the wind and make beautiful patterns. 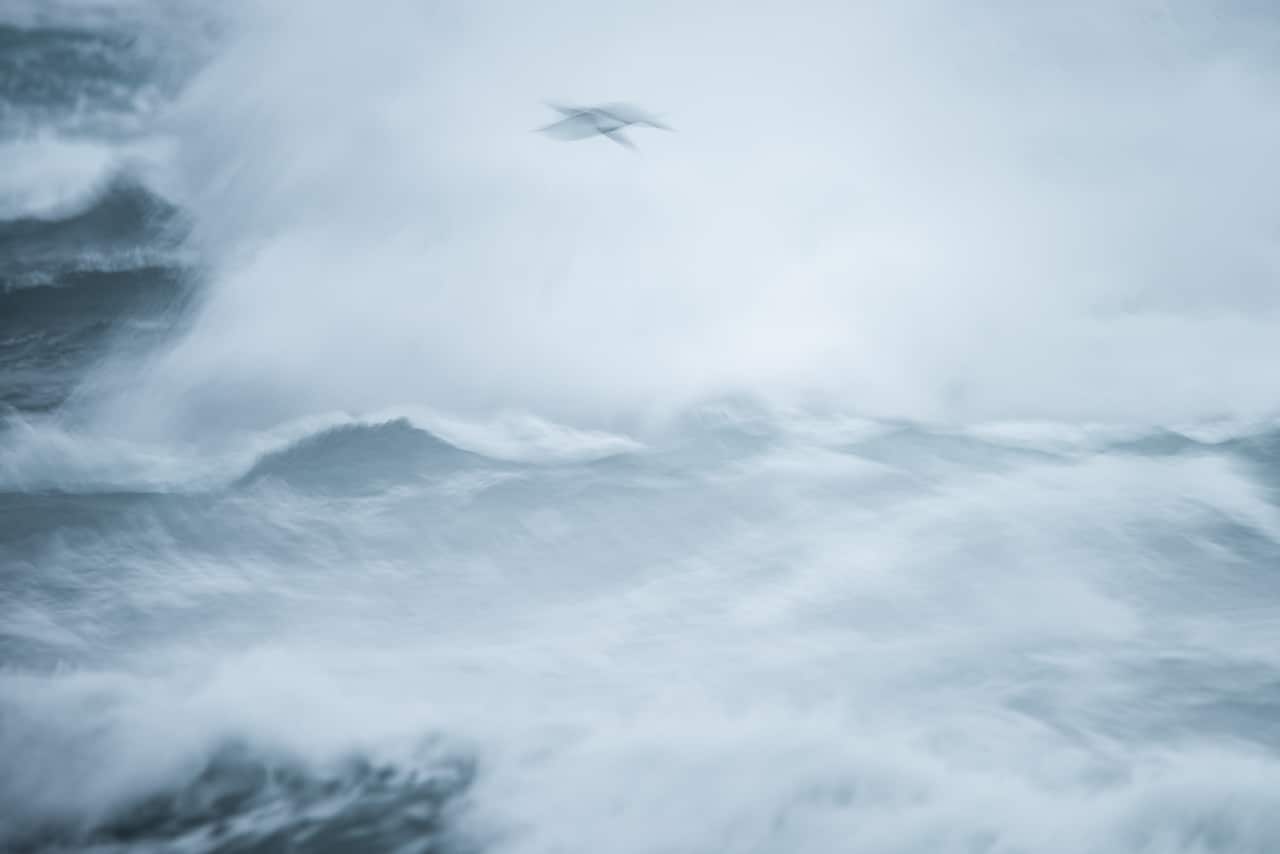 The next day I decided to head out early. I was treated to some early morning light at Birsay that made the sea luminous and beautiful. I spent a while shooting some long exposure with my Fuji XT2 and lee filters and also some longer lens images. The morning sunrise continued well into late 9 am. One of the unique things about Orkney in the winter is the late sunrises and early afternoon sunsets.
After a couple of hours by the water's edge I decided to head to a new location and drove back, stopping by Skaill bay on the way back. I took a cliff walk from here as I had spotted waves crashing onto nearby cliffs. I stopped and shot the huge crashes against the rocks. This is everything I love about Orkney; the vastness of the cliffs, the energy of the sea and the birds flying amidst the chaos of the sea's energy.
The afternoon saw us take a drive to see Inganess beach along with the wreck of the WW11 boat that sits in the bay. The afternoon light was delightful so we headed over to the Churchill barriers to take in some more of the wrecks. 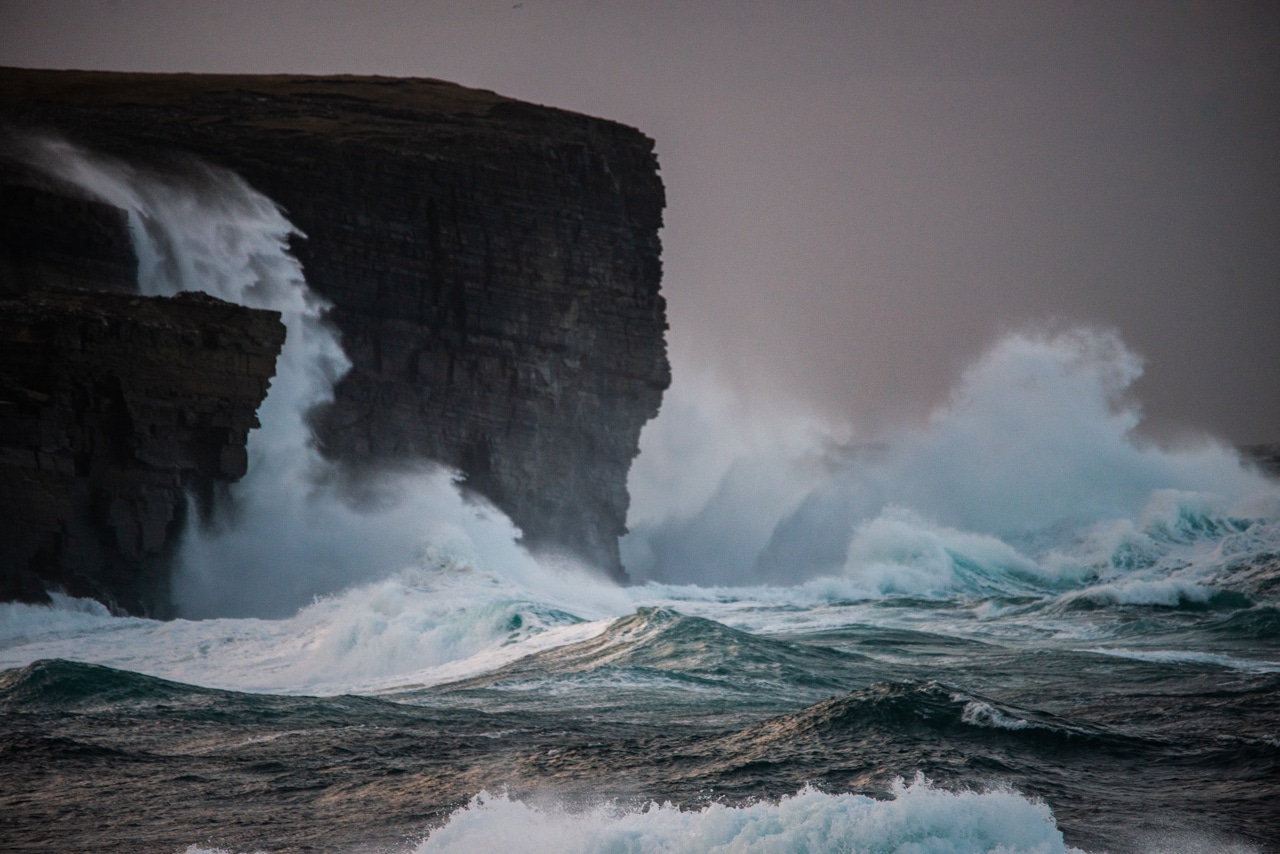 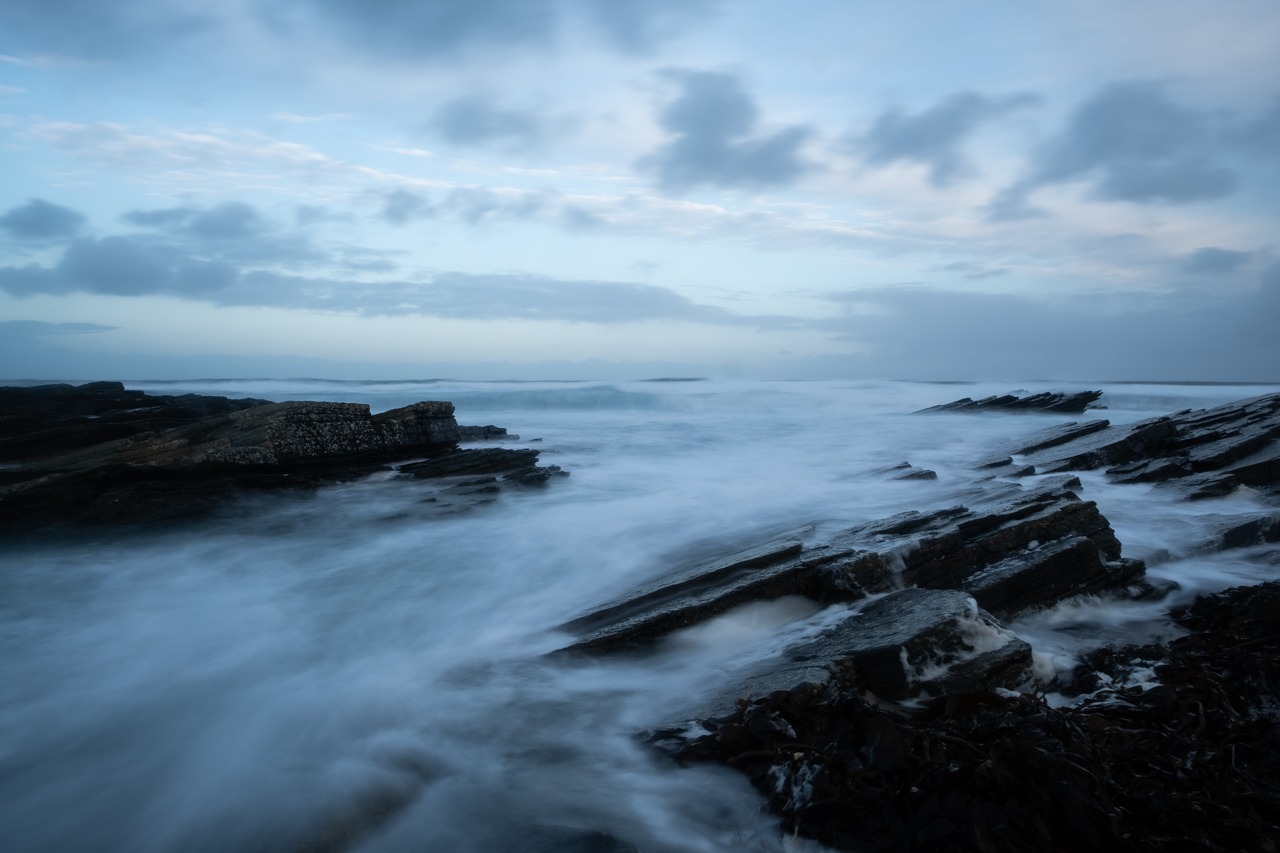 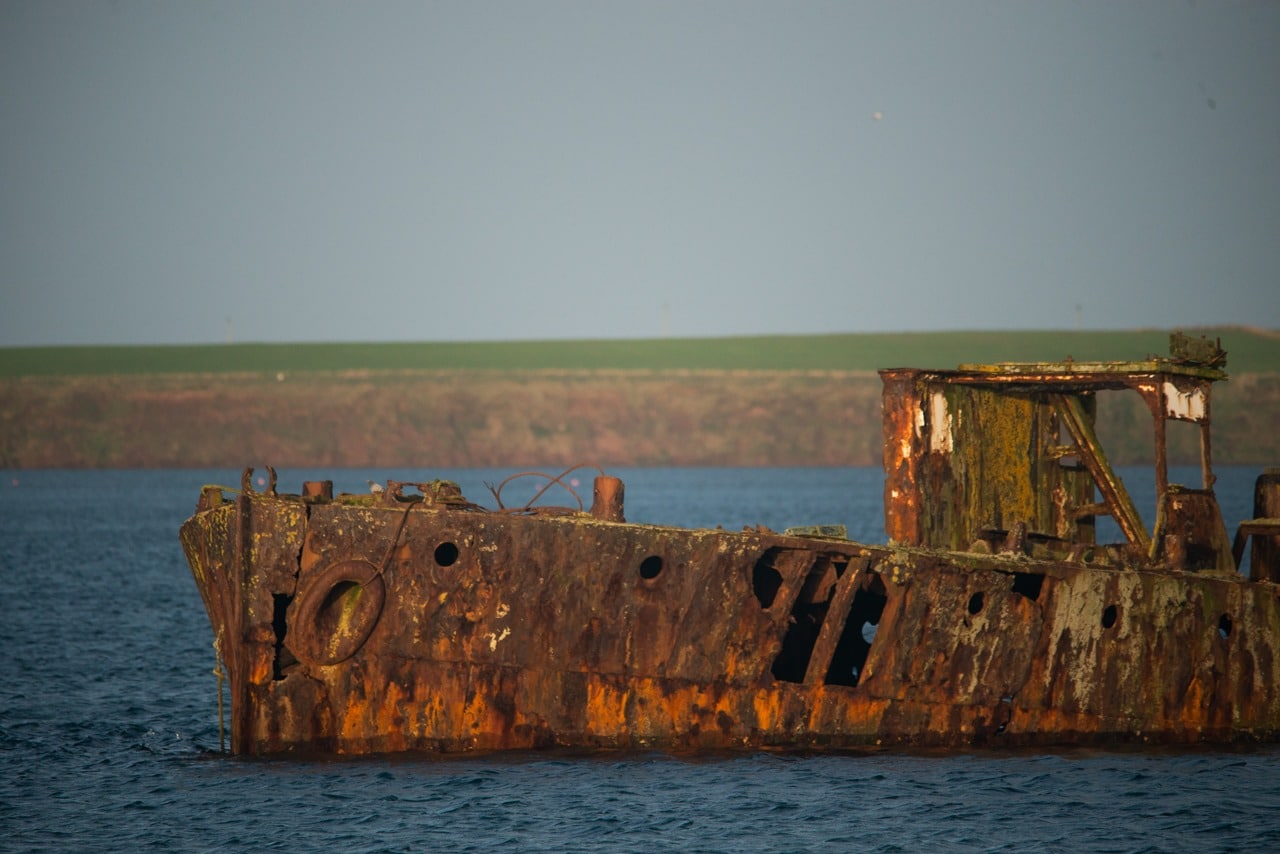 New Year's eve started off with a wonderful swim with local lady Alison who swims most days in Orkney. We were joined by several members of the Orkney Polar bears, a group who swim outdoors all year round in Orkney. We swam in Stromness as the sun rose to incredible pink, purple tones surrounded by the sound of a thousand gulls. After this rather chilly experience, I headed back to my self-catering house in Stromness for a warm-up.

Then off towards Marwick without a firm plan. As ever, I seem to be drawn back to the west coast time and time again. I headed up the cliffs at Marwick in the morning towards the monument which stands prominently on the cliff edge. By chance as I reached the top, the sun began to peek through the clouds and cast rays of sunshine down towards the hills of Hoy, the Old Man of Hoy visible at the edge of the land. 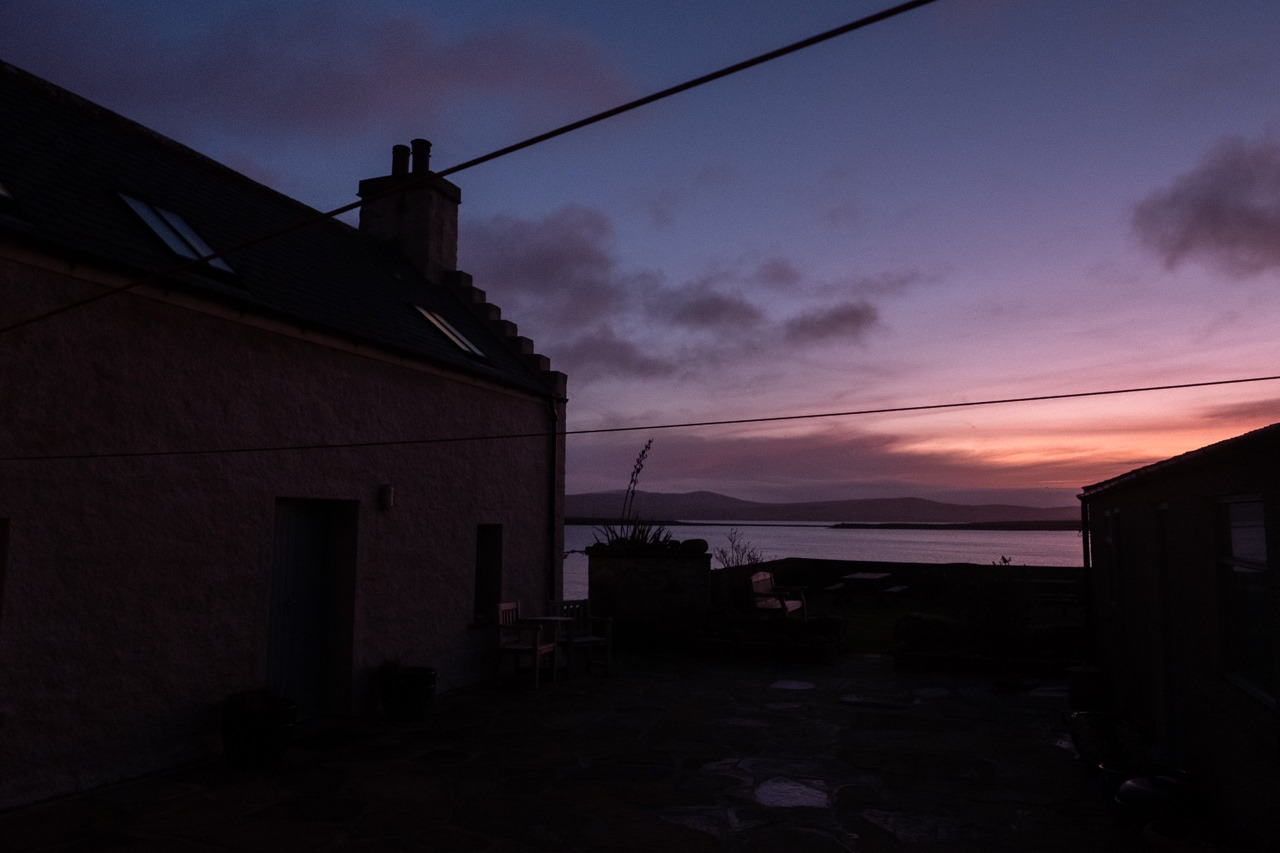 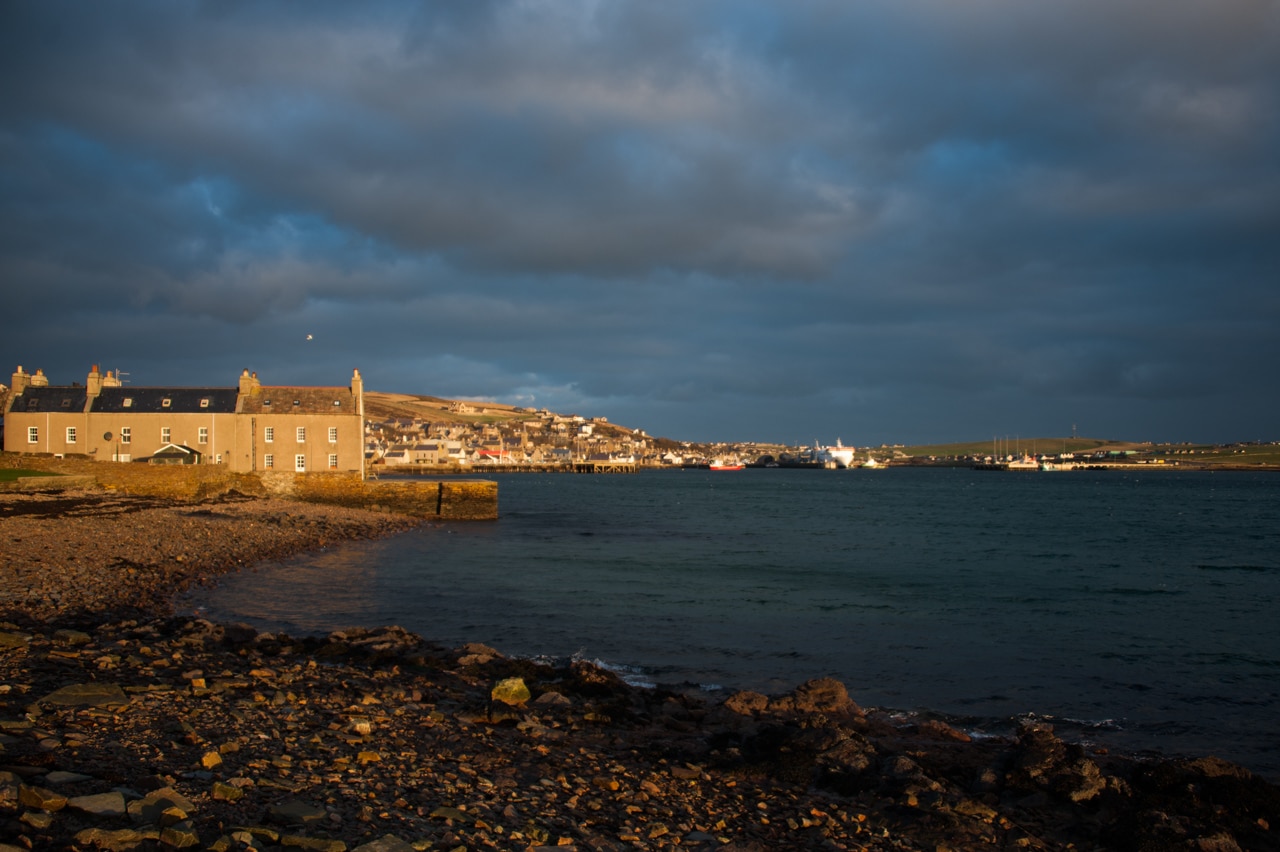 I woke to yet another incredible sunrise on Orkney so rushed outside to photograph I from the end of the garden. One of the best things about staying in Stromness is that a lot of the houses have their own piers and gardens which back directly onto the water. So finding a good viewpoint can be very quick. I headed over to the Standings tones of Stennes afterwards to catch the last of the very late sunrise. By now it was 9.30 am and the sunrise was still going strong.
Then I made my way up to Birsay again searching for waves. Patience was rewarded by two hours later sunlight suddenly appearing and hitting the waves. The quite unbelievable colour in the waves is highlighted when this happens. 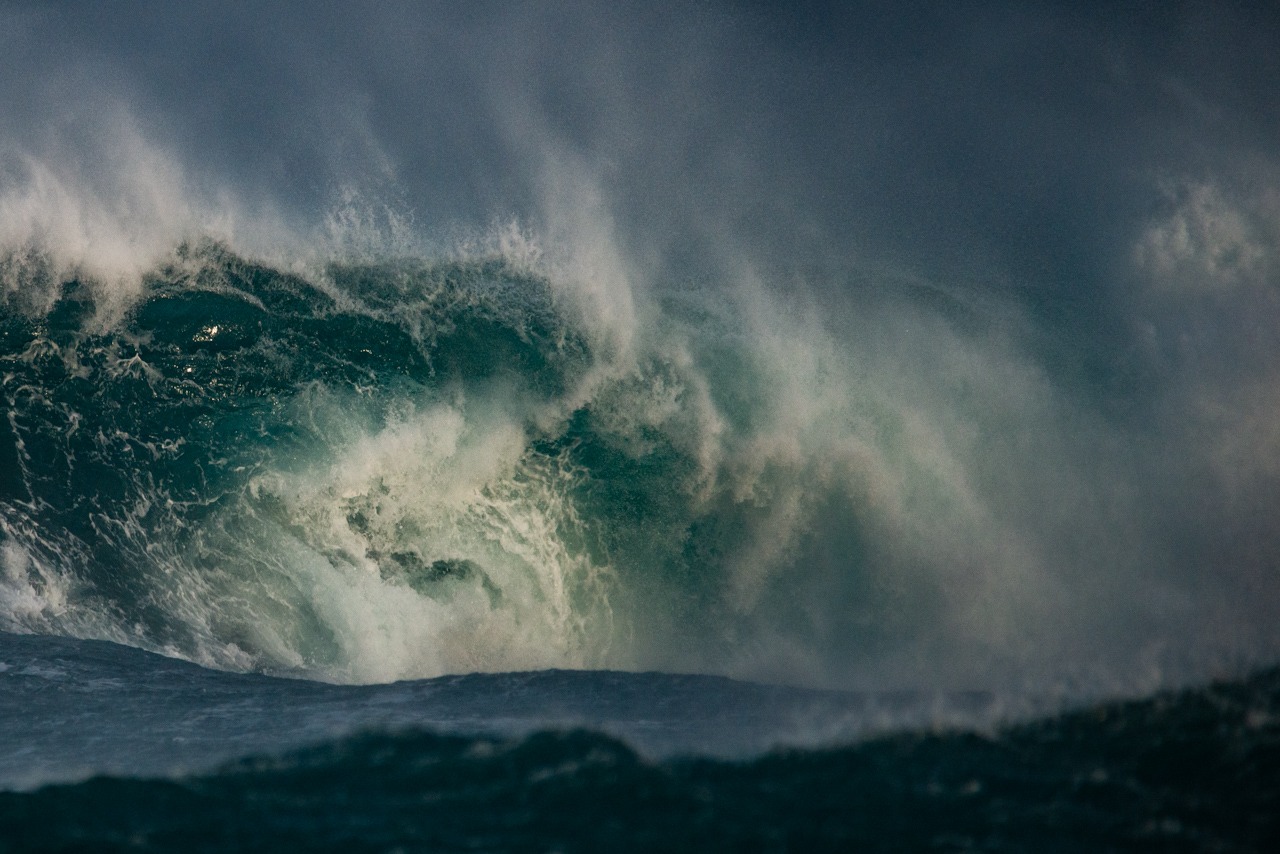 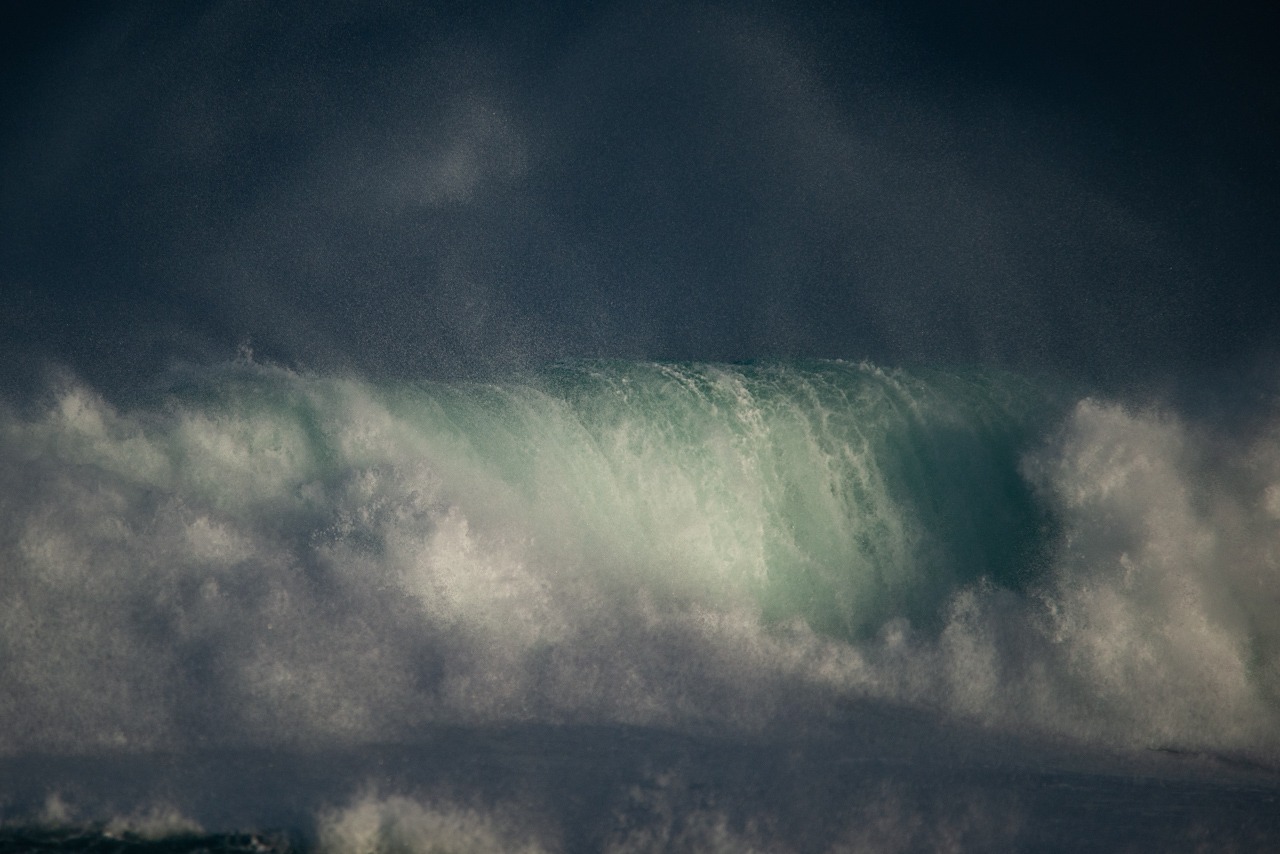 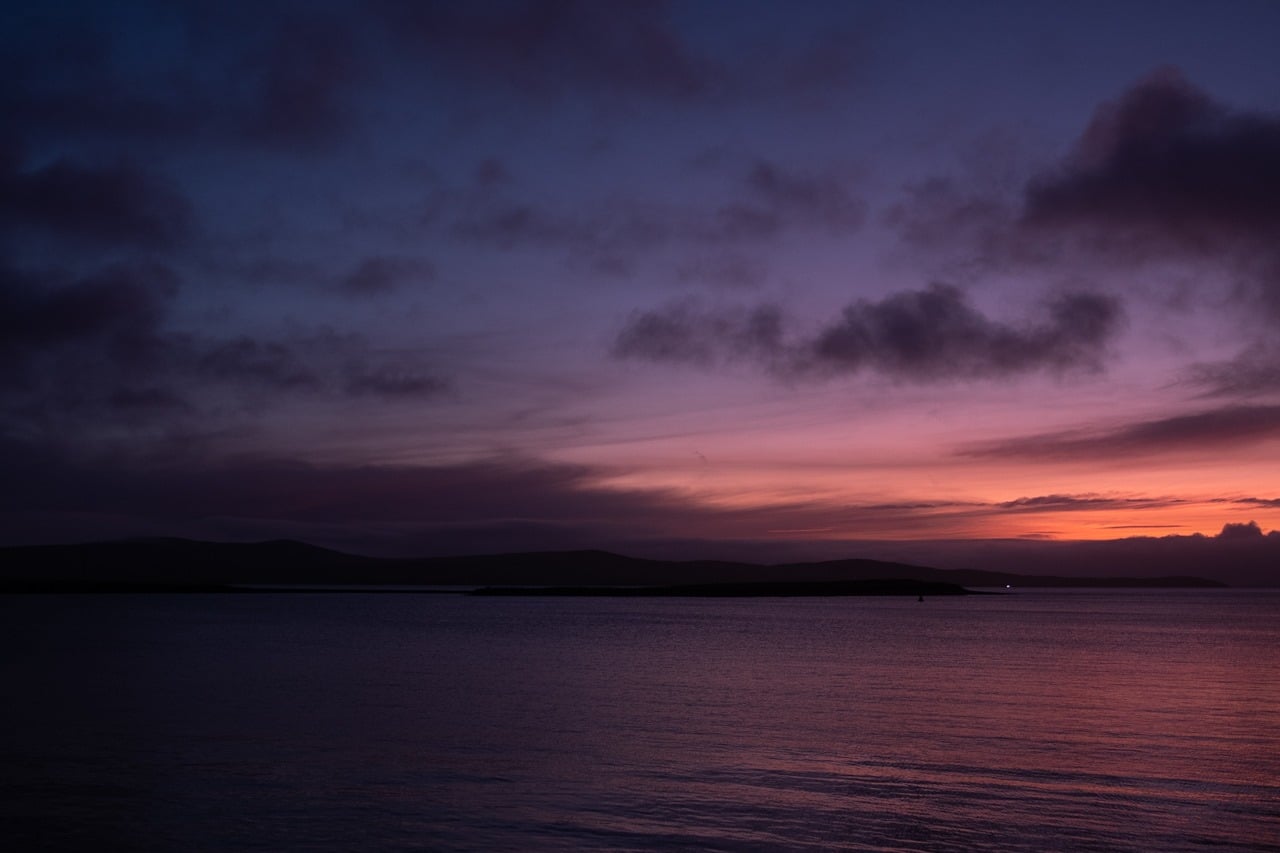 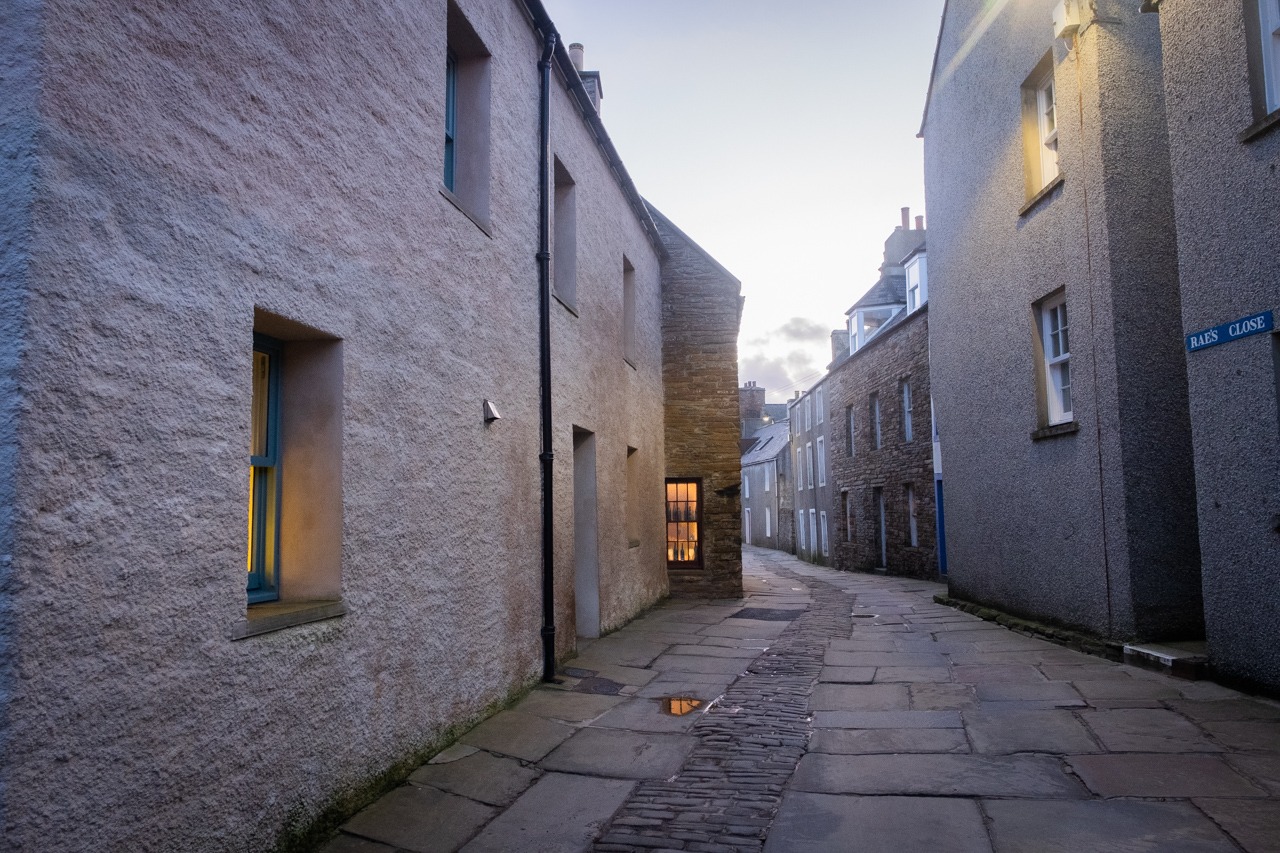 My last day on Orkney this year was an interesting one by chance. The ferries were cancelled due to high winds so our departure didn't happen as planned. Looking at the weather forecast I was absolutely delighted as the photography possibilities were endless. We opted for a night on board and to sail first thing instead. So that gave me the day in Orkney amidst the best conditions I had seen in a long time. High winds, huge waves and dramatic light. Often you get high winds and waves but with just rain making it almost impossible to shoot. So the occasional downpour and hailstorm was no problem at all.
We rounded off the day when the darkness crept in around 3.30 pm by heading into Kirkwall to find somewhere warm to sit. The Judith Glue Real food cafe hit the mark with its lovely home cooking made with Orkney produce and interesting gift shop. It is just opposite St Magnus Cathedral which was looking amazing lit up in the dusk.
Then it was on to the Storehouse Restaurant in Kirkwall, a beautifully restored building which manages to combine a modern and historic feel. I'd highly recommend the Storehouse for a drink, a meal or even a stopover.